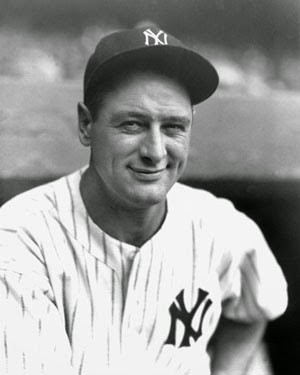 Lou Gehrig gave his famous "luckiest man" speech on July 4th, 75 years ago. He died two years later from ALS or what many now call Lou Gehrig's disease. The disease still has no cure. Very often it afflicts athletes.
My brother Jim, a former captain of the Boston College Rugby Club, was diagnosed with this disease over ten years ago. He opted to go on a respirator in order to support his family (His employer set him up with a computer, which he operated by the movement of his eyes.) and watch his two young children mature and enter college. He did both thanks to his extraordinary wife, his classy employer, and a lot of other very nice people-- both family and friends.
Here's a poem I wrote a while back. It is included in my book, The Custom House ( Ibbetson Street Press 2012 ):

Playing Chess with Jim
Hands handy, you had them then,
Your mathematical head still high,
Muscled; I set up the chessboard,
The beep of the ventilator breathing
Your breaths, stealing your facility
For life-support. You, the good brother,
One of our sisters called you, engage
Me in some special convalescent
Arena, a green jousting field,
A hospital of tactical, twisting
Moves. Pawns ever advancing.
Your face, flickering with mortality,
Blinks: you’ve lost a step. My knight
Moves in. Life’s outlook going grim,
Changed forever as you retreat
Into yourself, recalculate.
A card counter, banned from Vegas,
You banked a family, watched them grow,
Blinked, eye-scanning your work.
Still in the future, your prize
Piece of software there waiting, punched
In by your irises, ALS
be damned. Checked, and checked again.
You seem distracted. I press, read
Your hooded strategy, now gain
The advantage that you’ve given me,
That you’ve plotted in each move,
In all the detail of your life’s game.
at 9:15 PM

Another age: our greed-governed ancestors
Venture forth, significant supercargoes
Compelling the twins: speed and economy.
They bounded oceans for Madagascar
Or Malay, craved the Orient’s garb.
We watch for their return with telescope
Of brass: pennants streaming, hull stowed with teas
And silks. We dream them into our harbors.
We await tribute from captains now arrived,
Long doldrumed—their ships in need of repair:
Sails split and rotting, spars sprung.
Ascending the granite steps, these dangerous men,
These men unable to meet our tariffs
Curse the collectors of the world, the weights
And measures; their minds unbalanced, salt-eaten.
They sulk impatiently, clawing their daggers:
We’ve seen their kind before.
Once in every while a revolution;
They murder us at our desks: stabbed with pen,
Bludgeoned with ink bottle. We disappear
For a time: there are advantages,
Our ghostly machinery still keeping account.
In the end they always pay.